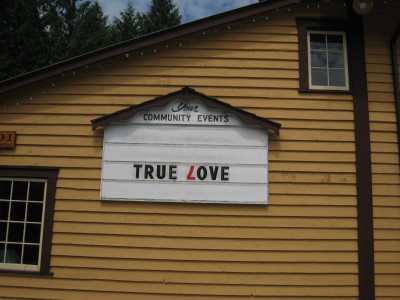 “I’m not in love with him any more,” a wife said sadly, sitting in my office.

She had been.  Once, over a decade ago.  Before the brutal murder of her husband’s younger sister.  Before the years of tracking down the killer, the long, long trial, the life-sentence in prison.  Before the birth of their own two children. Before Jason’s promotion at work that required 70-80 hours a week at the office.  Once, a long, long time ago Darci had been in love with her husband.

When his sister’s life had been taken in an unimaginable way, Jason had changed.  He became bitter, withdrawn, angry. “Who wouldn’t?” said Darci.

I certainly would have, I thought to myself.

Now, a decade later they find themselves in my office.  Darci describes her situation this way: “I’ve pulled away, far, far away, from Jason.  I don’t know how to come back, and worse, I don’t even know if I want to.”

Jason panics when he hears this.

As I listen to their story, it begins to make sense.  After the sister-in-law’s death, Darci and her needs took the back seat.  As someone who avoids conflict, she pulled back in the face of Jason’s hurt and anger.  She withdrew. Jason’s only objective for two years was finding the man who had killed his sister.  He was dogged and relentless and eventually succeeded. Darci became pregnant. She reported how she felt very alone in the pregnancy and the birthing of their two kids.  When Jason wasn’t at the office, he was off running or biking, something he said he absolutely needed to manage the stress at his job. Darci kept quiet and shouldered the burden of raising their two children.

When the children entered school, Darci began to pursue her own interests:  coaching children’s soccer, starting a book group. Her needs for feeling valued and for emotional sustenance and support began to be met elsewhere.  She continued to fulfill her child-rearing and household responsibilities, but found she sidestepped opportunities to be with Jason alone. She preferred to be by herself  immersed in a good book or with her friends. Sex became a chore.

The good news was she came to counseling willingly.  Tentatively Darcy began to express her anger and her hurt regarding how they both had allowed Jason’s needs to dominate their marriage.  But more importantly, she was beginning to see her part in that damaging dynamic.

Jason, in the meantime, worked to manage his anxiety and to listen to Darci’s story.    As he comprehended how hurtful his behaviors had been to her, he validated and acknowledged her experience.  He told her he had no idea that what he had been doing had been so harmful, but that he got it now. He encouraged her to tell him what she wanted and needed from him.  He wanted to show her he could change.

Will this be the end of their long marriage or will it be a new beginning, the opportunity for a new chapter, of a much deeper and rewarding connection?

No one knows for sure at this juncture, but there is always hope.

Reclaim connection with your partner and build a vibrant, harmonious, and resilient relationship with the Mindful Love Course
Learn More

Get connection-inspiring insights delivered right to your inbox